I’ve taken a two-days off this week, after having split restdays for quite a while. Since I don’t have enough money to go out, I instead indulged myself in two things I love doing during spare time: reading books and watching movies/series. I started rummaging into our seemingly crowded not-watched dvd drawer, but

really cannot decide on what to watch! After few minutes of talking to myself, I picked The Departed since I’ve been wanting to watch that for the longest time. It is a mobster-themed movie directed by Martin Scorsese. It was actually *adapted from a 2002 Hongkong film Infernal Affairs which saw a policeman going undercover as a mob member and a mob member infiltrating the police force. Scorsese transfer the action to Boston, positioning Leonardo DiCaprio as undercover cop William Costigan and Matt Damon as the undercover mobster Colin Sullivan. While both of them get into plenty of nail-biting situations that almost reveal their true identities, Scorsese gradually unravels his strong supporting cast including Jack Nicholson as Sullivan’s mob boss Frank Costello; Ray Winstone as Costello’s meat-headed muscle; Mark Whalberg as a hot-headed police sergeant; and Vera Farmiga as a love interest for both Damon and DiCaprio’s characters. It was a pretty intense movie! Done in the most realistic manner, I can almost hear my heart beating everytime there’s an exciting scene. The acting were superb! All of them did an amazing portrayal you’d be drawn to each and every character. It was engrossingly violent, yes. If only I counted how many times the word f**k and f****ng was mentioned in the entire movie, I’d be damned!

After watching that, I then decided to finish the novel I am reading. It was the acclaimed piece of Lualhati

Bautista titled Dekada ’70. I bought the book November of last year and got the time to read it only now. I actually liked it. It was true, touching, poignant and funny. It is a story of a family caught in the middle of the tumultuos decade of the 1970’s. *The novel details how a middle class family struggled with and faced the changes that empowered Filipinos to rise against the Marcos government. The shaping of the decade are all witnessed by the female character Amanda Batolome, a mother of five boys. While Amanda’s sons grow, form individual beliefs and lead diffent lives, she reaffirms her identity to state her stand as a Filipino citizen, mother and a woman. Dekada ’70 introduces to its readers the story of a family of a particular time in Philippine history, the story of a mother and her family, and the society around them that affects them. It was adapted to a movie in 2003, but prior to reading it, I haven’t seen the movie version. I am in a way familiar with some characters that’s why I can’t help but picture Vilma Santos, Christopher De Leon and Piolo Pascual in most of the scenes while reading it. The story itself is heart warming and eye opening. Although I got a bit lost in the first chapter, the succeeding ones proved to be exciting and in the end revealed a lot of things. I cried reading the part where one of their sons was salvaged and found dead, tortured with multiple stab. I really felt that moment.

I right away thought of watching the movie version, but since I don’t have any copy available I thought of 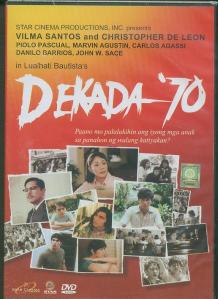 renting one in Video City. But I checked YouTube first and was glad to see some uploads cut into parts. I searched extensively then to my surprise I got a link from Crunchyroll to watch it. And there I found exactly what I am looking for! I got to watch the entire movie without interruption, yey! The movie version is an exceptional one! It indeed brought to life the novel and was adapted really really well. The scenes I loved were all there, and it exceeded my expectations. It still gives me chills up to this very moment I am writing this entry, that’s how moving the film was. Everything in it was just exactly what I pictured the time I am reading it, unbelievable! The house, the series of events, the unforgettable scenes, wow need I say more?! Director Chito S. Roño did an outstanding job, he still included those parts which didn’t need much stress, but did it in the most subtle way. The screenplay was A+ too, the writer Lualhati Bautista excelled in further depicting the story in an intricate manner. And do I still need to touch the acting part? Of course, who would even argue with the lead artists Vilma Santos, Christopher De Leon and Piolo Pascual. The supporting cast were equally good. My, how nice it is to rave about a movie released 5 years ago. You tell me.

Anyway, here’s an excerpt from a poem of Kahlil Gibran which was used in the novel. Really love this:

They are sons and daughters of Life’s longing for itself.

They come through you but not from you,

And though they are with you yet they belong not to you.

You may give them your love but not your thoughts,

For they have their own thoughts.

You may house their bodies but not their souls,

For their souls dwell in the house of tomorrow,

which you cannot visit, not even in your dreams.

For life goes not backward nor tarries with yesterday.