American Idol is back with it’s ninth season, and so is “Who Did It Best?”, a segment here in my blog where I feature two or three past Idol performances where people/viewers decide as to who’s version they liked best by voting at the poll. Yes, just in case you forgot haha! It’s been a while since my last post about this and since AI is back, and since it’s still the love month, I will feature a love song. A classic one, that is. But first, let me just acknowledge the past poll winner, Adam Lambert’s version of Feelin’ Good.

For the main feature, I chose Dusty Springfield’s You Don’t Have To Say You Love Me. First up, let’s hear it from Season 4’s Nadia Turner:

And now, from our very own Ramiele Malubay from the 7th Season. Watching this video still never fails to make me heave a sigh and go, “Sayang..” If only she continued to be this strong throughout the competition, she could have made it to the top 5 at least. Anyway, here it is:

March has been really a mad and crazy month for me! It became synonymous to words such as fun, friends, enjoyment, adventure and accomplishments. So I thought of creating a post that will mainly discuss on things I’ve been busy with, events, occasions and personalities that made an impact on my life, my family’s and some others too for the past thirty one days. Sounds too serious eh, but the ideas I had since last night were all funny and unserious haha! Impact may sound a little bit too heavy but I think I would include some events that the whole Philippines and probably the whole world too are aware of for the past month.  Politics? Nah. I don’t think I will be touching politics this time (or ever)hehe. New updates on gadgets or what’s hot in technology is also interesting, but I am not that much updated when it comes to those. Probably if finally I’d be able to provide a new cutting edge laptop or the newest hip mobile phone for myself. But what I will be discussing below are just simple things that brings joy to simple human beings like me haha! Those that made my month, a sort of recap.  On how well it went.  I will be doing this every month, and there’d be a yearly thing too haha.. So, to start things off..

The early summer fever. I have spent the first week of the month beachin! Of course, the Galera getaway tops this list of recapitulation. I won’t go into details anymore since I have already posted two of the 3-part series regarding that haha! It was a good way to start the summer, and it looks like I’ll be beachin for more the entire season (number of plans from friends are piling up as I compose this entry).  And just after an awesome Galera weekend, I went swimming with some friends and the twins tagging along.  It has been a yearly thing for that group of friends of mine to go swimming during holy week, and we’re three years running. We chose to go to Bulacan this time, since we’ve exhausted all the resorts in Montalban haha! The next beach/swimming escapades will take place next month with yet other group of friends. 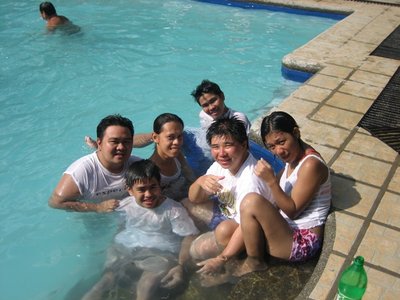 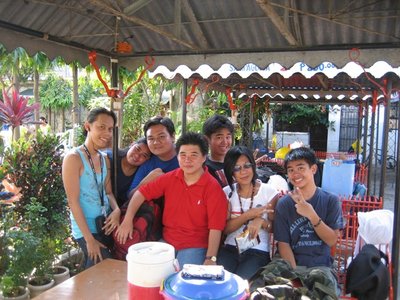 Malubay on American Idol top 12. This is the month where the final 12 finalists were revealed after several weeks of battling it out on the semi-finals.  And this is the time where our very own Ramiele Malubay also made it to the most coveted list! The whole country raved, along with the Filipino community in the US.  But our girl’s first two weeks at the finals had been rough.  She’s been getting not-so-good comments from the judges because of the equally not-so-good performances she’s giving.  You don’t wanna know how some online people are bashing and picking on her on forums! It’s baaad! Anyway, I just hope she’ll start defining herself as an artist and pick songs that will really showcase  her amazing singing voice. Goodluck, Ramie! I still love you no matter what they say hehe.. 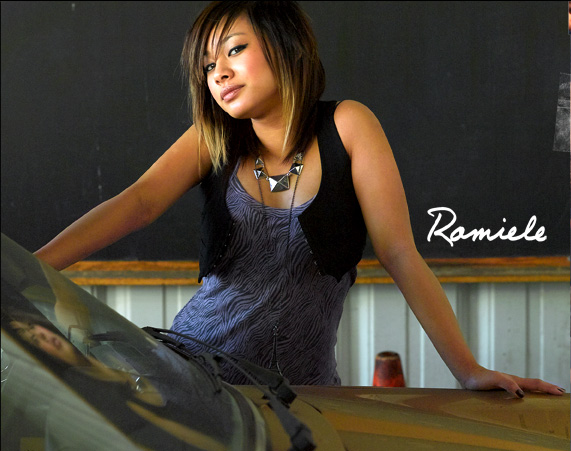 The Ken Lee craze! My oh my, never had I been so addicted to youtube til came Ken Lee! hahaha.. The first time I watched her now-so-famous 4million+ hits video, I just couldn’t stop laughing! Even my twin brothers and my mom nearly ran out of breath.  Her voice kept on singing in my head, i tell yah! My friends and my boss had the same story haha. And the next thing you know, she’s already on the news and became an instant sensation! We just can’t get enough of Ken Leeeee!!

Pacman & Janina. Another victory for our Manny Pacquiao indeed! I haven’t seen the fight because I am at work.  Some say that it was “cooked” (luto! haha), but just the same, it was another winning moment for him during Philippine politics trying times.  He was then coined as PGMA’s savior, because he always converts the public’s attention everytime the President is facing major political issues.  And then came Janina San Miguel, a 17 year old runaway winner of this year’s Binibining Pilipinas whose answer to the pageant’s final question made a big noise and controversy.  She’s now the country’s favorite laughing stock, the subject of all this ridiculuos email and text jokes circulating around. But what this girl Janina didn’t know is that she actually made a lot of people realize that all of us, especially the youth nowadays, should focus and practice more on our vocabulary and speaking skills.  And the more revealing truth here is that the quality of English education students are getting now has become poor and really bad.

A freshie no more! My twin brothers really enjoyed their first year in school, my alma mater San Francisco High School.  They both are part of the special section and are active members of the school’s most prestigious program, Special Program for the Arts.  Joshua is in Theater Arts, while Jeremiah is in Dance Academy.  I remember during enrollment time when they were both hesitant to enroll because most of their elementary friends are in a different school.  But now, they seem to have found more friends and extremely enjoying being part of the school’s special section.  Joshua, as a neophyte in theater, is actually doing good in his acting. We’ve watched their school plays and mom and I agreed he has the makings of a good theater actor. Because of that, he received two medals commending his good performance! Jeremiah, on the other hand, seems to love dancing now and has lost weight because of everyday rehersals for shows.  He also got high grades, but failed to make it on the Top 10, even if he got an average of 91%, because competition is too stiff on a special section. So, now that they’re awaiting their sophomore year, I bet it will be more exciting and fun for them!

Joshua and his two medals

Jeremiah and his dance buddies

Triple Treat! Just recently, two of my friends LT & Mei had a joint birthday celebration. And since a friend of ours (Arden aka Alpha of Radio1) is graduating from college, our get together also became his post-graduation bash! A night of three occassions! We had fun three times over! We met over at Trinoma, had dinner at Gerry’s and of course coffee conversations after.  I was short of cash that day, so I planned on going without any gift for them. But thanks to Imkimi, an online portal where you can do fun stuff to your photos, I then thought of a last minute gift and made them a personalized card with our pictures on it! Thank God they loved it hehe.. And what better way to do this blog entry than doing it today, the actual day of Mei’s birthday and Arden’s graduation! I actually made it a point to do it today haha.. Cheers, mah friends!! 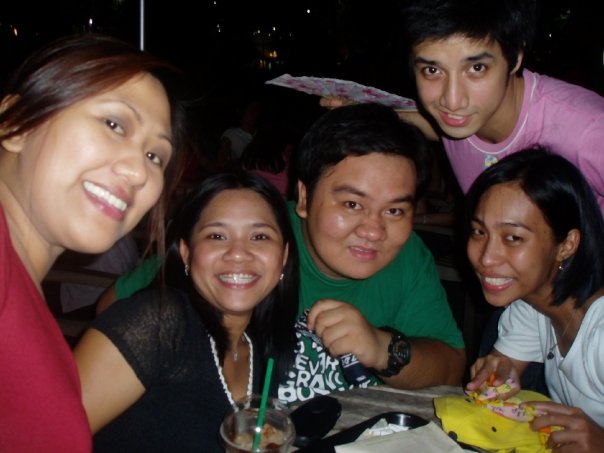 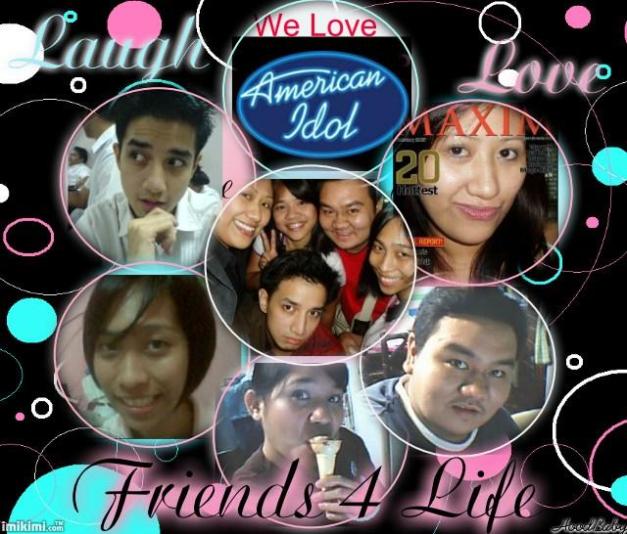 The picture I made into a greeting card!

So that’s how I spent and enjoyed the March that was.  And from the looks of my upcoming April schedule, it would be more exciting! I’ll be meeting up with some elementary classmates at Pampanga, get together with some present & previous workmates, and go to my birthplace Cagayan De Oro City! Yey! I just hope that it will all sail smoothly and everything will work out according to planned.  Have a great summer vacation to all!

Yes! After 3 AI seasons, another Filipino made it to the final 12! The last ones were of course Jasmine Trias and Camille Velasco, both from the 3rd season. But never did Pinoys cease to appear and make it on the show after that. Sharon Galvez, a former member of the now defunct singing group Smokey Mountain, made it to the top 50 on the 4th season. Jose “Sway” Penala was on 5th season’s top 24, and AJ Tabaldo just last season at the top 24 too. And now, we are so raving for RAMIELE MALUBAY!! (Pronounced as “mah-loo-bye”.  Attention, Mr. Seacrest!) I do hope our girl would make it to the finale! And will eventually be the first Asian American Idol! I bet she’ll get all the support from millions of Pinoys all over the US. Just when you thought Idol had it’s all time low last year, the show got more exciting! Indeed it’s the most talented season, and a Pinoy is definitely in! Amazing!

But it’s not just all smiles for our 21 year old Florida belter. Just recently, racy pictures of her has been posted on the internet telling bad things about her. This is probably what Ryan Seacrest wants Ramiele to talk about after singing Against All Odds, asking what the inspiration is behind the song. But Ramiele won’t go there, she just plainly referred to it as some “stuff” in the past and that it’s TMTH. Clearly, it’s a case of what Pinoys would call “paninira”, a bad publicity, the last thing an Idol hopeful need. But to hell with that, and to those schemers! She has great talent, very promising and has the makings of an excellent artist. Issues like that are just part of being a star. Inggit lang sila!

Anyway, let’s just give in to the excitement of the show. I am in my utmost elation everytime I watch it, especially this season has the most talented batch. Aside from Ramiele, I would love to see David Archuleta

on the finale. I love this kid! Never fails to amaze me. My other picks would be:

Too bad Asia’h Epperson got voted out! I believe she deserves to be at the top 5! Anyway, let’s just all wish them luck, especially Ramiele! This season’s top 12 offers much promise and they all deserve to be there, it will be just the votes that will make them stay longer in the competition.

So, to our girl Ramiele.. We will all be waiting for your more improved performances. Show the world how big Filipino talents are! You definitely make us proud!  Ramiele, Mabuhay ka!